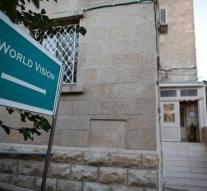 - Israel accuses the leader of World Vision aid agency in Gaza of channeling aid funds to Hamas. Both Hamas and World Vision speak against the allegations.

Israel arrested Mohammad El Halabi on June 15 when he tried to cross the border into the territory controlled by Hamas. The Palestinian, who directs carries on the work of World Vision in Gaza would have made a confession since 2010. He played according to Israel converted a small six and a half million a year, more than half of the Gaza-budget World Vision, to Hamas through. The money would be used partly to buy weapons.