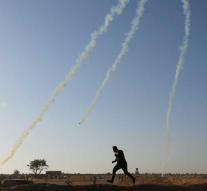 jerusalem - Israel is going to crack down on Hamas commanders and Palestinians who are trying to set fire from Gaza on the other side of the border. The resistance movement has discovered a new attack weapon, the 'fire flyer', soaked in diesel and oil. They stab them and let them do their work when the wind is right over the fence.

According to the newspaper Haaretz, this already resulted in forest and grass fires that threatened the kibbutzets Or HaNer and Nir Am and the town of Sderot. The Minister of Security Gilad Erdan responded immediately with a countermeasure. Sharpshooters may in turn open the fire if they get hostile flyers in sight, with the command to kill. 'Since Hamas is the only organization that allows shootings and piloting, we must resort to the preventive elimination of the perpetrators. ''

'Every time they come up with something new, tunnels, rockets and now this '', Erdan continued in Haaretz. 'The enemy is trying to break the resilience of our citizens because they know they can not hurt the Israeli army. But that will not work. ''