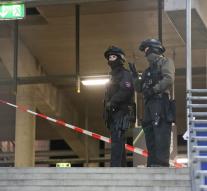 - An Israeli secret service last week warned the German authorities of an imminent attack in Hanover. The German weekly Stern has heard from government circles that the warning Monday already entered. On Tuesday, more information on that. There would have been an acute threat which the friendly match Germany- Netherlands that day was canceled at the last minute.

It was Israel's duty apparently managed to unravel the exact sequence of the planned attacks in Hanover, said Stern. In line had with the attacks in Paris is to take place a series of attacks in the German city. There are specific times and purposes mentioned which would also be there in the stadium of immediate danger.

The Saturday before the game was already a warning received by the German intelligence service BND from Iraqi sources that after Paris also attacks in Germany were planned. That information, however, was little else concrete.