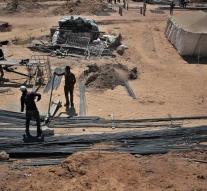 jerusalem - Israel suspects a Palestinian employee of the development organization of the United Nations of the box lice aid money to Hamas. UNDP Engineer Wahid Abdullah al-Bursh has made a confession, the Israeli intelligence service Shin Bet.

Al-Bursh conducted according to Shin Bet,, multiple jobs '' for Hamas. He would have helped with UNDP money to build a jetty for Hamas fighters. He shrugged his superiors about neighborhoods where Hamas leaders live to give priority to the reconstruction of Gaza.

UNDP employee was arrested in July. He must appear before the Israeli courts. Al-Burshs employer has not yet responded to the allegations.


Last week, Israel announced that it had arrested a member of staff of aid agency World Vision because of similar suspicions.