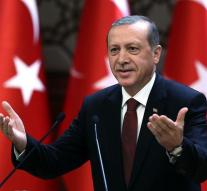 - The crisis between the two countries resulted from the Mavi Marmara incident, the aid convoy led by Turkish Muslims five years ago wanted to bring goods into the Gaza Strip.

Israeli commandos blocked the aid convoy, came on board and killed during skirmishes ten Turks. Turkey was then furious at Israel. The diplomatic relations were severed. Israel later offered apologies, but that Ankara was insufficient.

Erdogan had previously fiercely against Israel. In 2009 he was already at an international economic forum in Davos railed against Israeli President Peres. But the increasing international isolation it still floats into the arms of the Jewish state. The war in Syria threaten Russia and Iran, supporters of Syrian President Assad, no more gas supply to Turkey. Now there is talk about a gas pipeline that would run from Turkey under the sea by Israel. Israel can use in turn also improve relations with the powerful NATO country. Israel will have to pay compensation money for the Mavi Marmara incident.