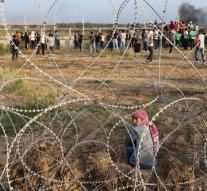 jerusalem - The Israeli government sends more police on the streets to reverse the spiral of violence. Also, if necessary, shut the Arab neighborhoods of Jerusalem. The past two weeks the Gaza border crossings and the streets of many cities especially the scene of stabbings .

Dozens of deaths were due to violence. Four Israelis and at least 27 Palestinians died so far. The government has also decided to deploy the army, particularly in Jerusalem, where the violence began after the access was extended to the al-Aqsa Mosque for Jews.

The mosque is a holy place for both Jews and Muslims. Buses in Jerusalem have temporarily uniformed security guards with. Furthermore, roadblocks are being set up to monitor the traffic.