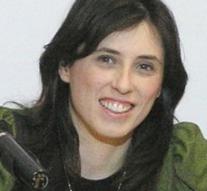 jerusalem - The dispute between Israel and the Palestinians over the holy Temple Mount is further fueled further. The Israeli foreign minister Tzipi Chotoveli threw controversial statements fresh oil on the fire.

" It is my dream to see the Israeli flag waving on the Temple Mount ", he said on television. The plateau is " the center of Israeli sovereignty, in the capital of Israel, the holiest site of the Jewish people ", said the Deputy Minister of Foreign Affairs, continuing Monday the tone.

His comments are in clear contradiction with Israeli guarantees the status quo of the place, which both Muslims and Jews is holy, do not change. The scheme means that only Muslims on the Temple Mount come to pray. Jews and Christians can also visit the place alone.