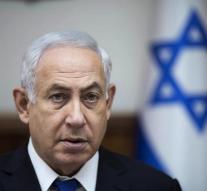 jerusalem - Israel has begun building a new settlement on the West Bank. Israeli Prime Minister Benjamin Netanyahu announced that on Tuesday. It is for the first time in 25 years that Israel makes a new settlement in the area.

Netanyahu said he was 'the honor' to be the government chief who built for the first time in decades a new settlement on the shore. He felt obliged to build because he had promised the Israeli residents of Amona new homes. They had to leave the court because their village was illegally built on private land.

It is also for the first time since the beginning of the peace process that Israel officially makes a new settlement. So far, only expansion of existing settlements has been mentioned.

The Israeli Security Cabinet approved the building at the end of March. That led to international protests.