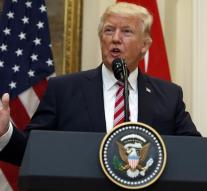 washington - The relationship between the United States and Israel has not been violated by recent reporting. That said the Israeli ambassador to Washington on Tuesday (local time) told the BBC. US media reported earlier that the secret information that US President Donald Trump would have shared with senior Russian officials would be from Israel.

'Israel has complete confidence in the exchange of information with the US, and even wants to intensify it,' said Ron Dermer. The ambassador did not consider whether the information was correct. The White House did not want to comment.

Trump has been under pressure by the message in The Washington Post on Monday that he would have released very secret information in a conversation with Russia's Foreign Minister Sergej Lavrov, among others. This information can be given by Russia to his ally Iran, an enemy of Israel.