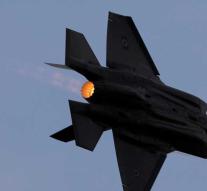 jerusalem - Israel says it was the first country in the world to carry out combat missions with the F-35. According to Israeli media, the head of the Air Force said that the fighter plane was deployed twice for attacks on various fronts.

The military, Amikam Norkin, showed at a conference also photos of an F-35 in the Lebanese airspace. He did not tell when the photo was taken. According to Norkin, the fighter plane was not used during the last Israeli attack on targets in Syria.

Israel currently has nine F-35s, reports The Jerusalem Post. In 2024 the country is expected to have access to fifty aircraft. The F-35 is also known as the Joint Strike Fighter.