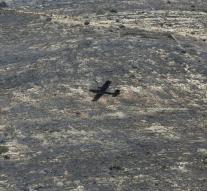 - The fires that plague Israel for five days now, are still not under control. Due to the strong winds and drought flames flared again on Saturday. A settlement on the West Bank to be evacuated over a thousand people. At least 45 houses were reduced to ashes. The victims mostly respiratory complaints by the smoke.

The police assumes that many fires are lit deliberately. So far there have arrested thirteen suspects. According to the newspaper Haaretz drones are deployed to timely identify potential arsonists.

Israel has got to fight the conflagrations help from several countries. From the United States is the largest arrived extinguishing plane in the world. The modified Boeing 747-400 can carry 80 tons of fire extinguishing and even at operating overnight. The device has also been used in Israel in 2010 when a devastating wildfire in the Carmel Mountains claimed 44 lives.