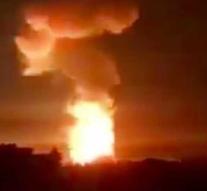 latakia - The Syrian army has had to activate its anti-aircraft guns after air raids on Latakia, according to international news agencies. Several explosions have been heard in the city.

The bombing would have been carried out at a scientific institute. Attacks on Latakia, in the middle of the Assad area, but close to the border with Turkey, are certainly not common. 'The timing is also striking,' says correspondent Ralph Dekkers from Tel Aviv.

Some analysts had expected an attack from rebels. According to Syrian state media, however, the bombing would have been carried out from the sea. 'That would mean that it is not the rebels, but Israel,' says Dekkers. 'In recent weeks, after a relatively quiet summer, that country has resumed the attacks on Syria, especially in places where Iran is active. '