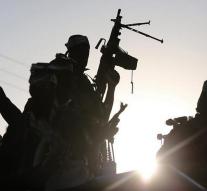 - Israel has bombed in the night of Sunday to Monday in the Gaza Strip dozens of targets. This was done in response to a rocket attack by Palestinian militants Sunday.

An Israeli spokeswoman confirmed that fighter jets have attacked several Hamas targets in the northern Gaza Strip. Several people were injured, including children. The Palestinian rocket attack Sunday in the Israeli border town of Sderot, no one was injured.

The former chief of the Israeli Air Force, Elieser Marom, said at news website Ynet that the Israeli reaction is harder than usual. The ultra-right Defence Minister Avigdor Lieberman would thus like to say that there are not to be trifled with Israel.


A senior military stressed that Israel does not want a further escalation of the conflict.