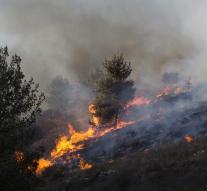 - Israel has enlisted the help of Greece and Croatia to fight several major wildfires that plague since Tuesday wooded areas near Jerusalem and Haifa. Government Leader Benjamin Netanyahu on Wednesday to send the Foreign Ministers requested fire-fighting planes from both countries. They have undertaken.

The fire is fueled by high winds and prolonged drought. Police suspect that there is arson. Several residences are vacated. A number of houses to ashes. There are no reports of casualties. So far only treated people with respiratory problems.