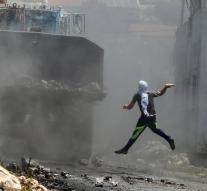 jerusalem - The Israeli army on Wednesday shot dead a Palestinian in the West Bank. According to the Israeli army happened that when the two cars drove into the military.

The soldiers were working on an action in the Qalandia refugee camp. They were looking for suspects who they wanted to arrest and weapons. In two places in the camp drove Palestinians in a car on the military.

According to Palestinian medics arrive four Palestinians with gunshot wounds in the hospital. They were injured in various clashes with the army in the camp.