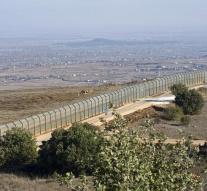 A spokeswoman for the army did not give any details about the targets that were attacked, or the means by which that happened.

Israel is formally neutral in the civil war raging in Syria. However, it has vowed to prevent supplies of sophisticated weapons to Hezbollah backed by Iran. Fighters from the Lebanese Shiite militia fighting in Syria along the side of President Bashar al-Assad.