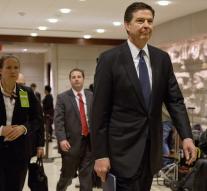 - The movement Islamic State (IS) has revolutionized terrorism. This was said Wednesday the head of the FBI, James Comey. Comey said that " especially the way IS around the world on a small scale encourages individuals committing attacks for terrorism is revolutionary."

He also pointed to the dynamic way that IS " coded communicating through social media, and the Internet for propaganda used smooth ". The threat of Islamic State is completely different than that of al- Qaeda. The FBI is investigating across the US hundreds of possible Islamic conspiracies, Comey said.