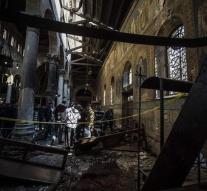 - The terrorist organization Islamic State (IS) on Tuesday claimed responsibility for the suicide attack on the main church of the Orthodox Christians in Egypt, the Cathedral of St. Mark in Cairo. The movement of Sunni extremists threatens more attacks on what they call infidels and apostates.

Sunday, a suicide bomber blew himself up in a chapel for women belonging to the church. There were 25 deaths and nearly fifty wounded, mostly women and children. According to the statement of IS was the culprit Abu Abdallah al-Masri. That is a different name than the Egyptian authorities on Monday gave the offender; Mahmoud Shafik Mohammed Mostafa.

Egypt has an estimated 92 million inhabitants. A large majority of Egyptians are Sunni. The number of Christians is never very clear political reasons. According to estimates, there are now nearly fourteen million Christians. Some Muslims argue that there are much less, some Christians more. Almost all Egyptian Christians are Orthodox and are also known as Copts.