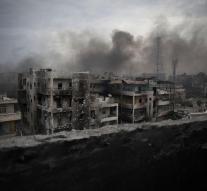 aleppo - The commander of the Islamist militia Fateh Jabhat al-Sham Thursday near Aleppo killed by an air strike. The group was known in the past as Nusra Front, the Syrian branch of al Qaeda. The death of leader Abu Omar Saraqeb by rebels in the northern Syrian city, where all times be fought heavy disclosed.

Saraqeb was eliminated during a meeting with like-minded people in the countryside outside Aleppo. The origin of the fighters who carried out the bombing, is still unclear.