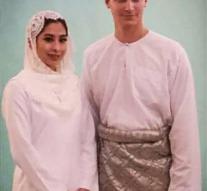 johor bahru - Dennis Verbaas, the 28-year-old Dutchman who marries the Malaysian princess Tunku Tun Aminah on Monday in Johor Bahru, lived in Amsterdam while in contact with Islam.

That tells the future groom, who converted to Muslim faith in 2015, in a rare interview with the royal press service of the southern Malaysian state of Johor.

Verbaas, who is now living as Dennis Muhammad Abdullah, reports in the conversation that he became very interested in Islam in 2014, after which Muslim friends advised him about faith. Amazed even if they could take him to the mosque because he was curious how they went to prayer.

'My heart is open to accept Islam, and I am grateful that I can reach the knowledge that is given to me,' he explains. 'My parents also support me in embracing my belief. '

The Lissenaar, a former football talent working today as a model in Asia, says Islam made him more calm. For two years he has been joining Ramadan's fasting month. He is definitely planning to live as a pious Muslim.

'After I received the blessing of Johor, Ibrahim Ibni Almarhum Sultan Iskander, and received the hand of his daughter, I was told that I should get a deeper understanding of faith. '

Dennis Verbaas and Tunku Tun Aminah, the only daughter of Johor's sultan, marry Monday. Residents of the city can follow the traditional ceremony in Istana Besar, the great royal palace, on large video screens.