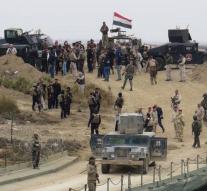 They would therefore like to force the international coalition to stop bombing ISIS goals and seeking refugee ISIS fighters, said a director of the province in which Ramadi is.
The Iraqi army said earlier this week that it had recaptured Ramadi on ISIS. But nonetheless prove to be hundreds of jihadists in the town entrenched. Wednesday they killed forty civilians.

Ramadi was taken by ISIS in May.