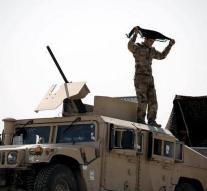 beirut - Buses with IS warriors evacuated from an area near the Lebanese border have reached Deir al-Zor on Wednesday in eastern Syria. The evacuation took place after the terrorist organization had released a Hizbollah prisoner. That confirmed a Commander of the Lebanese militia who fought with the Assyrian Syrian army.

Damascus and Hezbollah announced last month that nearly three hundred jihadists and as many relatives could leave an enclave at the Syrian-Lebanese border after a violent offensive. The coalition led by the Americans prevented the buses from driving to Deir al-Zor, after which the convoy split in two. It is unclear whether all vehicles have arrived in the area around the city where Islamic State is still serving.