Home / World / IS warrior picked up in Italy 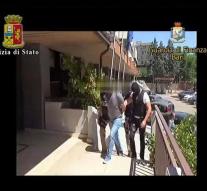 bari - A 38-year-old Chechen was arrested in Italian Bari. He would be a warrior of Islamic State (IS) and launch an attack, the Italian police announced on Saturday.

The man fought between 2014 and 2015 for IS in Syria and he would be involved in a Grozny attack in December 2014. Nineteen people were killed in that attack in Chechnya.

The suspect would maintain contact with other terrorists and extremists in Europe. He is being linked by the police in Italy, among other things, to IS terrorists involved in the attacks in Brussels in 2016. Italy has also expelled two brothers from Albania and Russia. They would have been recruited by the Chechen.