Home / World / IS-trailer gets 38 years in prison in Australia 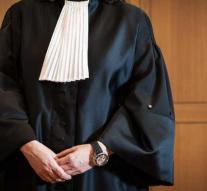 canberra - An IS supporter who helped with the preparations for a terrorist murder was sentenced to 38 years in prison in Australia. Milad Atai (22) refused to stand up in court and laughed when he heard the penalty, message broadcaster ABC.

The man was involved in planning the murder of a police officer in 2015. Then a fifteen-year-old boy shot the victim to death at the police station in Parramatta. Atai assisted extremist Raban Alou, who won the firearm for the later shooter.