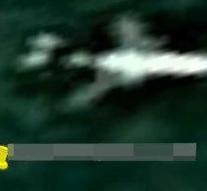 - Is the disappeared Boeing 737 MH370 located in the Cambodian jungle, a few hundred kilometers west of the capital Phnom Penh? The British video editor Ian Wilson thinks so. He spotted the silhouette of an airplane on Google Maps.

A measurement on the images seems to indicate that the aircraft on the ground would be about 69 meters long, which is slightly longer than the 63.70 meters that a Boeing 777-200 officially measures, writes The Sun. Wilson thinks that can be explained by a dark spot at the tail of the silhouette: 'There, the tail of the trunk could be separated. That explains the extra length. '

Aviation experts now demand a search on the spot where the wreck should lie, in the middle of the thick jungle of Cambodia.