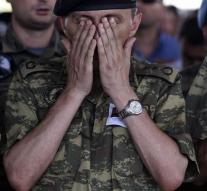 ankara - Turkey has access to Twitter, YouTube and Facebook restricted to prevent the spread of a horror video of the murder of two Turkish soldiers by the terrorist group Islamic State. With IS affiliated websites published Thursday evening, a nineteen-minute film, which shows how the two together chained soldiers humiliated by Turkish-speaking jihadists and burned.

The video was by SITE Intel Group, which follows expressions of jihadists on social media, shared on Twitter. Turkish authorities blocked them immediately access to social media were showing the images. Friday the sites were accessible again, but obviously delayed.

One of the soldiers was kidnapped by IS in Syria last year. The images were distributed while Turkish losses run up in Syria. The Turkish armed forces on several fronts, on its own and on foreign soil fighting with Kurdish separatists and jihadists of IS.