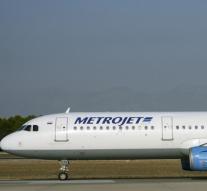 - Supporters of terrorist organization Islamic State (IS) claiming the Russian device that crashed in Egypt, having been shot. Responsibility was claimed in a statement published on a website of supporters of IS.

" It fighters from Islamic State managed to get a Russian plane with over 220 Russian crusaders over the Sinai down. All of them are slain, thank goodness ", said in a statement. The crash, all 224 passengers were killed. The Egyptian authorities reported earlier that a technical defect is the cause.

On the Sinai Peninsula several groups of jihadists are active. They often fight with the Egyptian police and military.