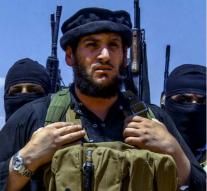 The slain al-Adnani gold as the main spokesman for the terrorist group until he was killed earlier this year by an air raid. He was considered as the number two IS behind the leader Abu Bakr al-Baghdadi.

It is still unclear who is responsible for the death of al-Adnani. Both the Americans and the Russians have declared that they are behind the attack.