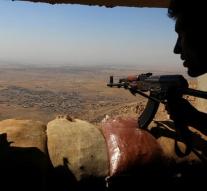 london - Islamic State has lost more than a quarter of the territory it once controlled. The terror group was according to analysts at IHS since January last year, 28 percent return of its area, the BBC reported.

'The losses of territory in July are relatively small in scale, but unprecedented in terms of strategic importance,' said IHS analyst Columb Strack. The terror group is among others expelled from the Turkish border. Therefore it has become more difficult to smuggle fighters to Syria via Turkey.