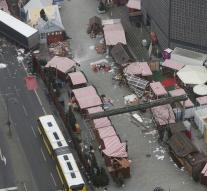 berlin - The victim of the attack at the Christmas market in Berlin in December was put under pressure by members of Islamic State (IS) to appoint the massacre. That's what German media reported Wednesday on the basis of information from the research that has been considered closed for some time now.

The Tunisian Anis Amri actually wanted to travel to the caliphate declared by IS in Iraq and Syria in October. One or more members of IS, however, insisted on Amri that he would commit an attack in Germany. The terrorist movement saw the 'special potential' of Amri, according to the researchers. The Tunisian also had contact with an IS member who was seen by the researchers as an 'instructor' and explained how he could attack the West.

Amri rode on the 19th of December with a stolen truck to the public at the busy Christmas market in the German capital. There were twelve people. Amri was shot in Italy in flight.