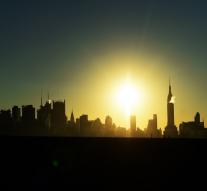 - In a new video of Islamic State (IS), the terrorist organization announced that New York is a potential target for attacks. IS says that comparing the attacks with those in Paris last week. Police in the US city is aware of the message, but said Wednesday (local time) that there is no specific threats.

" parts of the images are not new, they merely confirm that New York is an important target ", said Deputy Commissioner Stephen Davis. However, the city remains in " extreme state of vigilance ".

The video IS lasts almost six minutes and let images of Times Square and preparations seeing a suspected suicide bomber. There are also images of Paris and French President Francois Hollande, according to a description of the American organization SITE following terrorist activities.