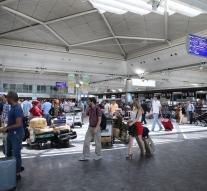 - Turkish police have arrested at Atatürk Airport in Istanbul two men she loves to members of Islamic State. The two detainees have both a Russian and a Kyrgyz passport, the Turkish news channel reported. Any previously arrived two claimed by, among other camouflage, the police fell on a 'risk analysis'.

The airport was last Tuesday the scene of a bloody attack. The Turkish government is counting on the IS. Since the attack are stationed at Ataturk special police units in order to ensure safety.

The death toll of the attack, responsibility for which has not been claimed, is now at 45.