Home / World / 'IS killed hundreds of people around Mosul' 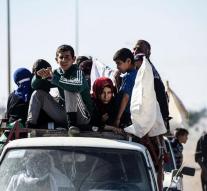 mosul - IS terror movement has and possibly killed hundreds of people around the besieged Iraqi city of Mosul. The UN said Friday that the militants ' according to reliable reports' 180 former government officials have been killed before they withdrew from the city Kokjali, east of Mosul. According to the same information assassinated the group as fifty own members who wanted to desert.

In addition, the UN has received information in the possible murder of about two hundred people in the besieged city itself. There are alarming reports from IS area. Thus, the terrorist movement according to the UN inhabitants of the locality Hammam al-Alil, 30 kilometers south of Mosul, shall assist their sons nine years and older off, possibly to make them fight. In Tal Afar would trap the group about four hundred women.

Even air strikes of the international coalition claim civilian lives. The UN reported that have come by bombing east of Mosul, four women were killed.