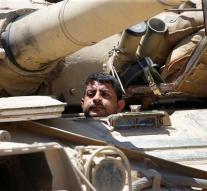 geneva - Islamic State Warriors (IS) have committed a massacre among Iraqi people who wanted to flee the city of Mosul. That's what the United Nations says. According to the UN, the militants launched 163 men, women and children this month.

'The cruelty of IS and other terrorists obviously has no boundaries,' said the High Commissioner for Human Rights, Zeeda Ra'ad al-Hussein in Geneva on Tuesday. How the UN comes to the information is not clear.

The Iraqi army is working on an offensive to expel IS from Mosul. The militants have been detained in the old city and capture about 40,000 civilians. The battles go from house to house and are particularly bloody.