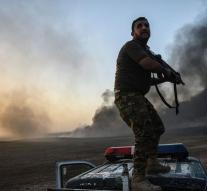 geneva - Islamic State has removed 550 families from villages around Mosul and stationed at positions in the city. Possibly the terrorists want to use those civilians as human shields when the Iraqi army reached the city.

The United Nations appealed Friday to sources in the area concerned by the release of the information. In one of the villages has Islamic State also killed another forty inhabitants, according to the office of the UN Human Rights in Geneva.

The Iraqi army, together with Kurdish units four days ago, the attack on Mosul deployed. The city with an estimated one and a half million inhabitants is of great strategic significance. It is the last major IS stronghold in Iraq.