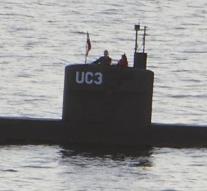 copenhagen - In the sea at the Danish capital, Copenhagen, a woman's body was found on Monday. That has been announced by the Danish police. It is still unknown whether it concerns the missing Swedish journalist Kim Wall.

The found body only consists of a trunk. The head and limbs are missing. A passing cyclist discovered the body, which has long been in the water.

The Danish inventor and owner of a submarine has stated that the journalist Kim Wall had died on board ten days ago by accident. He would have given her a seaman's grave in an unspecified place in Køge Bay at Copenhagen.

The suspect claimed that, after the disappearance of Wall (30), he had deposed her on an island in Copenhagen harbor. After that he was again taken out and his self-built submarine was sunk by problems with a ballast tank. He was rescued.