Home / World / 'IS IS REMOVED FROM RAQQA' 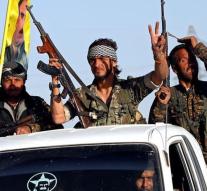 beirut - US-supported Syrian militias have expelled Islamic State (IS) from the Syrian city of Raqqa. This stated the Syrian Observatory on Human Rights Tuesday, which usually ranks on local sources.

The warriors of the Syrian Democratic Armed Forces (SDF) launched an offensive in June to recapture Raqqa, the former capital of the caliphate, on IS.