Home / World / IS is gaining ground in eastern Syria 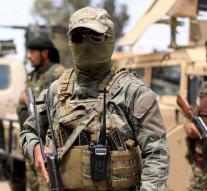 damascus - Islamic State has reclaimed large areas in the east of Syria containing one of the largest oil fields in the country. This is reported by sources within the opposition in the Deir-al-Zor province.

The Islamists took control of the area Sunday morning after the fighters of the Syrian Democratic Forces (SDF) withdrew. IS had lost the area east of the Euphrates river to the opposition fighters a year ago.