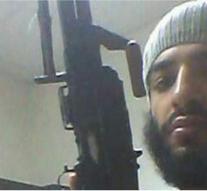 brussels - The brains behind the bloody attacks in Paris in November is gradually becoming more apparent. Abdelhamid Abaaoud, who initially thought he was the big boss, had stood a leader behind him 'Padre' is mentioned. The terror chief would come from Molenbeek according to Belgian media.

Although the Belgian security services have not yet been able to identify the man doing the media in the country have a try. The Belgian newspaper Het Laatste Nieuws found a picture of a man who was addressed as 'Padre' in the archives of Facebook. In the picture he poses Younes, the younger brother of Abaaoud.

The newspaper found that 'Padre' While casually mentioned in the judgment of the trial about the foiled terror plot in Verviers, but it is clear that Abaaoud had to listen to his orders. In a tapped phone call Abaaoud tells a henchman: 'The boss says you what to keep quiet. 'To which the other replied angrily and Abaaoud asked to call Padre.

When the series of bloody attacks on November 13, 2015 with most of the perpetrators were killed, 130 victims lost lives. Abaaoud 18 November in the Paris suburb of Saint-Denis slain by police.