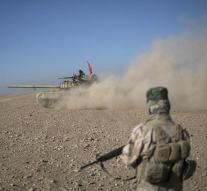 baghdad - Islamic State is fully encircled west of Mosul. So say Shiite fighters involved in the recapture of the northern Iraqi city.

The 'People's Mobilization Forces 'have by Kurdish soldiers busy intersection reaches the Syrian border, announces a leader of the paramilitaries. That would be by IS-controlled area between Mosul and the town of Tal-Afar are closed completely.

The People's Mobilization Forces were established in 2014 to halt the advance of IS in Iraq. The militias are not undisputed. As Amnesty International accused the fighters of human rights violations and war crimes against civilians in IS-area

The Iraqi army began in October on the offensive in Mosul, which fell to IS 2014.