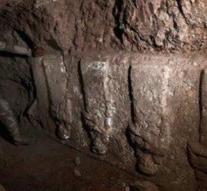 mosul - Archaeologists IS by the demolitions in Mosul investigated by archaeological objects, have made a remarkable discovery. Under the 2014 inflated tomb of the prophet Jonah, they found a 2,600 year old palace.

After the east of the Iraqi city last month on Islamic State was recaptured, the researchers came into action quickly. The tomb stands on a hill. The terrorists dug tunnels under the tomb to find valuable archaeological artefacts and selling. May unwittingly put them thereby exposing parts of the palace.

The place in the ruined city of Nineveh, part of eastern Mosul, has been repeatedly studied in the past, but the palace was not found. An inscription mentions the name of the Assyrian king Esarhaddon, who died in 669 BC.. Archaeologists say it was originally the residence of Esarhaddons father, King Senacherib, reports the Daily Mail on Wednesday.

IS destroyed the tomb because worshiping it goes against Islam. Jonas called in Arabic Yunus. He is considered a prophet in both the Koran and the Old Testament. One legend suggests that he survived three days in the belly of a fish.