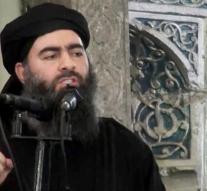 raqqa - Islamic State has confirmed the death of their leader al-Baghdadi. That late IS know in an official statement. More details about his death are not released.

The Iraqi al-Baghdadi has been extinguished several times since he was calling the caliph in a mosque in Iraqi Mosul in 2014.

Previously, Moscow reported that its forces had succeeded in killing him in May, following an attack on IS headlines in the vicinity of the Syrian city of Raqqa in May. Whether al-Baghdadi actually came to life at the attack remains unclear.