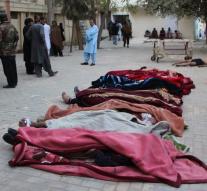 - Islamic State Tuesday's bloody attack on a police training center in Quetta claimed in western Pakistan. An IS-commander has threatened a Pakistani journalist with more attacks and said that IS will soon be the nightmare of the Pakistani government. Islamic State announced a comprehensive statement later in the day.

The bombing in Quetta sixty people, according to new police posts have been killed. There are more than a hundred wounded. Three armed men insisted on Monday the grounds of a police academy inside shots there around and took hundreds of cadets hostage. During the liberation of the hostages have been shot dead the three perpetrators, so the authorities informed.