Home / World / IS claims attack on broadcasting in Afghanistan 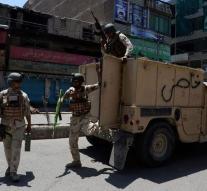 cabul - Islamic state is behind the attack on a state-owned office in the Afghan city of Jalalabad. The terrorist group claimed the responsibility for the attack in a statement published by Amaq press office on Wednesday. Fourteen people got injured.

Three or four armed men fought earlier in the day. There would also be an explosive. According to various media, the firefight is still ongoing.

One of the attackers has reportedly succeeded in shifting into the broadcasting building. The rest would have died. It is not clear where they came from. In the region of Jalalabad, 100 kilometers east of Kabul's capital, all armed groups are active, including the Taliban extremists and a group of jihadists who are in charge of terrorist movement.