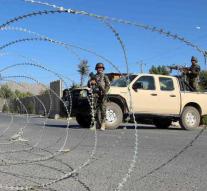 kabul - Islamist State has claimed the suicide attack on a mosque in the eastern Afghan province of Khost. That is what Amaq reports, the mouthpiece of the extremists. In addition, according to the Afghan authorities, at least 26 soldiers were killed on Friday and 50 were injured. Amaq speaks of fifty dead and 110 wounded.

The explosion occurred in a house of prayer on a military base at the time when mosque-goers were preparing for the Friday prayer. According to the spokesman, the victims all worked for the army.