Home / World / IS calls for attacks during ramadan 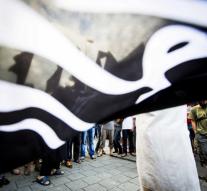 cairo - Islamic State has called for an audio message during the Ramadan attacks in the United States, Europe, Russia, Australia, Syria, Iran and the Philippines. The clip was distributed monday via the IS channel on Telegram, an online messaging service with encryption. It is reportedly Abu al-Hassan al-Muhajir, the spokesman for the terrorist organization.

Whether the recording is authentic can not be said with certainty, but the voice is the same as on previous audio clips attributed to Al-Muhajir. 'Lions of Mosul, Raqqa and Tal Afar, Allah blesses those pure arms and radiant faces, attack the apostates and unbelievers, and fight them with the power of a man,' said Al-Muhajir, who meanwhile means the Shiite Muslims. The Islamic fasting month began at the end of May.