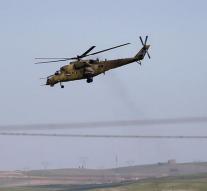 mosul - Jihadists from Islamic State on Thursday in western Mosul shot down an Iraqi helicopter. Both occupants were killed. It announced a military spokesman. The unit gave air support to ground forces that were fighting with IS militias.

It is the first aircraft that was shot down since the offensive on the northern Iraqi city began in October. The western part of Mosul is the last major stronghold of the terrorist organization in Iraq.