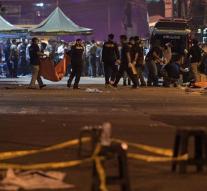 jakarta - Terrorist group Islamic State has claimed responsibility for the possible double suicide bombing in the Indonesian capital of Jakarta on Friday. Three agents were killed and twelve people were injured, including another six police officers.

According to the Amazon-based press agency, the attack was the work of the terrorist group. The perpetrators would have inflated themselves on a Wednesday at a bus station a few minutes after each other. The affected agents watched a parade.