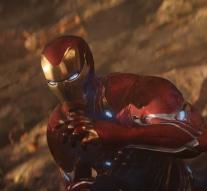 los angeles - The American police are looking for the suit of superhero Iron Man. The costume, which has an estimated value of around € 325,000 (approximately € 274,000), disappeared from a shed with film attributes in Pacoima (California).

Employees of the warehouse discovered by chance on Tuesday that the iconic film costume has disappeared. It is said to be the suit that actor Robert Downey Jr. for the first time in the 2008 film named after the superhero, the Los Angeles Times newspaper reports Wednesday. A spokesman for the police said the Iron Man suit was probably taken somewhere between February and the end of April.

It is still unclear whether the missing suit has been stolen. As far as is known, no other objects have disappeared. The police did not want to say who is the owner of the warehouse. Also, according to the newspaper, the police in Los Angeles refused to say whether one of the enemies of the fictional superhero is in the picture as a suspect.