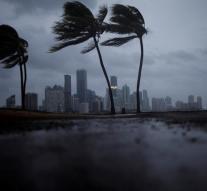 miami - The wind power of the tropical storm Irma increases. The American Hurricane Center in Miami shared her Sunday morning (Dutch time) at Force Four. After the storm left Cuba, wind power went off and the storm was of category two.

The wind speeds now rise to over 200 kilometers per hour. That will increase when Irma reaches the mainland of Florida in a matter of hours. With this she became 'extremely dangerous'. For this reason, the authorities have initiated a genuine relocation: more than 6.5 million people have been called upon to leave their homes and find safer places.

In subtropical Florida, about 21 million people live, including many retirees.